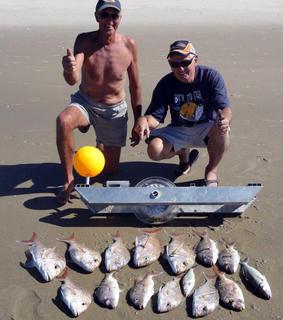 Protect your kontiki from sharks, fish through drifting weed and much more. The ShoreThing is the Safest Kontiki Setting System available. Hundreds of Kontiki's have been lost due to sharks biting through the mainline. Why risk losing yours?
Price:
NZ$ 800.00

The reason is simple, sharks are attracted to both the baits and any fish caught on the hook section.

Having baits and fish on the same line that is used to haul the Kontiki back to shore is very risky.

You just don't know if you will get it back. Now, there is a simple answer to the shark bite-offs and lost kontiki's. It's the ShoreThing Kontiki Fishing System.

If you are considering buying kontiki, check out this system first, it is by far the safest and most efficient way of setting hooks with an absolutely minimal chance of losing an expensive kontiki.

Give us a call and we will tell you what you do and don't need for the ShoreThing Fishing System. You won't need clip on weights, a hook section in your mainline, a 150-meter leader line or a trace rack and traces. This could save you up to $400 from your kontiki package.

The ShoreThing Kontiki Fishing System is a fully automatic longline setting device that is towed behind your existing kontiki and sets the hooks far away from the mainline. When sharks bite through the hook section, you only lose a few dollars worth of hooks, instead of between 1000 to 2000 dollars worth of kontiki, hook section and leader line. 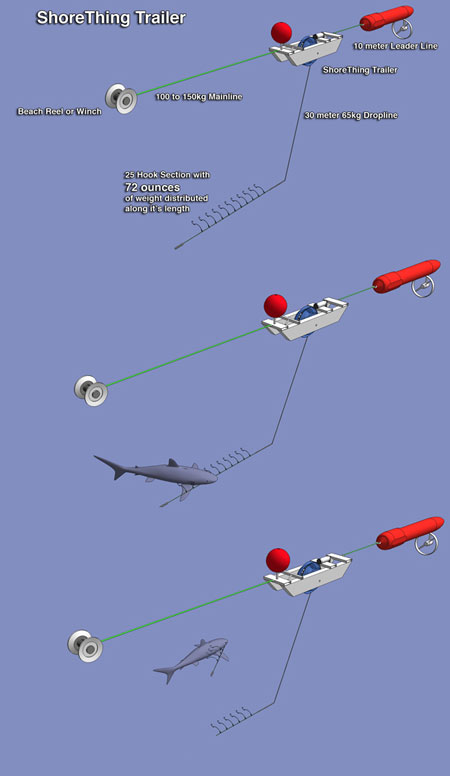 The ShoreThing is a dropper rig system that deploys a 25 hook, baited longline offshore when a timer releases the weight on the end of the hook section. The 72 ounces of weight anchors the kontiki much more securely than any other system. The weights are dispersed along the hook section and this dramatically reduces any risk of tangles in the hook section.

Please Note: The timer fitted to the New ShoreThing is different to the timers shown on the videos below. We changed the timers to a gobstopper release system which is far more reliable than the old clockwork ones. A video of the new timer is at the bottom of this page.

The ShoreThing Kontiki Dropper Rig Has These Advantages

If you have a ShoreThing Kontiki Fishing System the chances of losing your kontiki as a result of sharks biting through your hook section is very, very low because of the much greater distance between the hooked shark and the critical mainline. If you don't have a ShoreThing and a shark bites through your hook section then you cannot recover your kontiki from the beach with your mainline, if you can't get someone with a boat to rescue it, the kontiki is lost. According to

Snagged hook sections are the second most common cause of kontiki loss. If your 100kg to 150kg mainline is in good condition the snagged 65kg hook section of the ShoreThing will either break through abrasion on the snag, or the 65kg drop-line will break. You will still be able to recover the kontiki as usual. As with any kontiki you still have to keep your mainline in tip top condition. If you have a conventional kontiki and snag the hook section you are stuck until you break the mainline and lose the kontiki if you can get a boat to rescue it.

NOTE: A few other kontikis are cut off by boat propellers and vehicles driving through the mainlines on the beaches, both of these are avoidable if you take care where and when you set, and keep your gear near the waters edge, and not with mainlines spanning the entire width of the beach as some do. If just the mainline of a ShoreThing or conventional kontiki rig goes under a ledge or submerged tree the chances of losing either is still the same so we do not recommend fishing the ShoreThing in snaggy areas.

The ShoreThingis easier to tow out than a conventional kontiki hook section and leader line despite the fact that it carries far more weight to better anchor the kontiki against the rip. In our tow trials we used a boat with a GPS to tow the gear and always towed the same stretch of water consecutively. Most 46lb thrust kontikis set between two and three knots. The conventional hook section in the test was 150 meters of 100kg line, 32 ounces of weight (4 X 8 oz) and an 115 kg 80 hook pre-stoppered hook section baited with 25 average sized baits. The ShoreThing as tested had a 25 hook longline aboard, baited with average sized baits, 72 ounces of weight on the hook section and a 30 meter drop-line. The ShoreThing had around half the drag of a conventional hook section at normal kontiki setting speeds of two to three knots.

Many beaches have steep offshore banks that are quite shallow. A conventional kontiki hook section can get bogged or really struggle to get the line over the bank as the mainline weights and following hook section bulldoze into the bank and bury deep into the sand. The drag from this can be enough to spoil the set, or run the batteries flat before the gear has reached the fishing area. If the weights are left off to get over the bank, then drift when set becomes an even greater problem with the conventional kontiki system. The ShoreThing floats everything well above the bank and the un-weighted mainline, free from heavy weights and bulky baited traces and clips, slides easily up and over the offshore banks while carrying plenty of weight aboard to anchor everything at the pre-set fishing distance.

The ShoreThing usually carries 72 ounces of lead (it can carry more). As the weight is on-board the ShoreThing it does not have to be dragged along the bottom on the way out. When set the 72 ounces is distributed along the length of the hook section with heavier weights at each end. This weighting pattern acts like a chain and is very efficient and tangle resistant. A thin wire grapple or large breakout sinkers on a safety trace can also be added to the very end of the hook section if greater anchoring capability is required.

Some areas suffer drifting weed (red weed, sack weed, sea lettuce) which can form into clumps over the baited hooks when setting a conventional kontiki. Usually, fish will seldom be caught when the weed is around the hooks or covering the bait. This weed is often in a belt near the beach. TheShoreThing Kontiki Fishing System will always set the hooks clean of weed at the desired distance offshore and often beyond the affected area. You will still catch weed on the way back in, but it will be much less than the conventional system, as you have only passed through the weed belt once on the way in. Best of all you have a much better chance of catching fish because your baited hooks were weed free while the gear was fishing.

When using ShoreThing Kontiki Fishing Systemthe baits are not dragged over the seabed for one to two kilometres before fishing commences. The baits are carried aboard the ShoreThing and are set in tiptop condition right where you have decided to set. The extra weight on the ShoreThing hook section further enhances catch rates.

Once the gear is out you can relax. The gear is very well anchored and your kontiki is vastly safer than a conventional system, even if sharks bite through your hook section, or you snag the hook section. However you will still need to keep the reel near the waters edge and avoid areas where there are snags, boats are active or commercial fishers set nets, lines and crab pots etc.

Advantage 9. You Don't Need a Trace Rack or Hook Section in Your Mainline

Mainline maintenance is a breeze, you just need bare line wound onto a winch or beach reel. You don't need a trace rack or clip on traces either, as everything to do with fishing is always stored on the ShoreThing. So if you are thinking of buying a kontiki rig, give us a call and we will tell you what you do and don't need for the ShoreThing Fishing System.