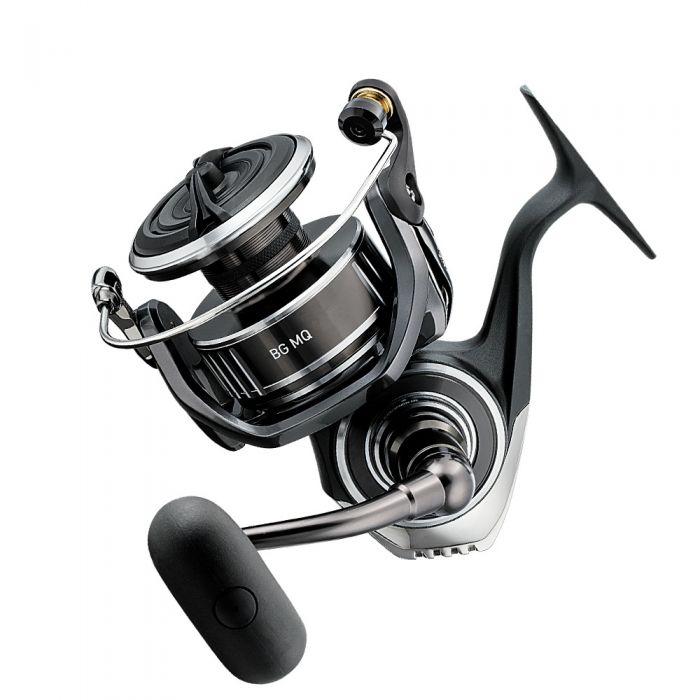 or four interest-free payments of $89.75 with

The screwless design principle of MQ bodies are also significantly more compact than a standard body design. Screws need material to grip to, and that means more overall size and more mass in traditional body designs. By replacing the side plate with a machined aluminium engine plate which screws directly into the reel body, MQ reels can maximise the internal space made available by using larger size drive gears than before.

Throughout the entire line-up of BG MQ, vast improvements have been made to almost all areas of the reel design. The drag has been improved both in maximum capacity but also in smooth overall performance, drastically reducing the friction of the Carbon ATD drag - BG MQ's drag performance is unmatched by the competition.

The MQ body construction not only has the obvious benefits of a stronger & more compact body design, it also delivers an increase in gear durability thanks to absolute zero movement of drivetrain components once installed inside an MQ body. Weather-sealing is also significantly improved, with seals visible in multiple locations throughout the reel, BG MQ is built for the harshest of environments.

Casting performance has also been improved with the implementation of Long Cast ABS (LC-ABS) spool design. LC-ABS spool design improves line flow from the spool, resulting in increased casting distances across the board with both heavy & light lines.

Throughout the BG MQ range, improvements have been made specific to the size of each reel to maximise their performance and overall appeal to each target market.

BG MQ marks a new era in affordable saltwater spinning reels from Daiwa, with MQ technology now available to the masses. BG MQ is built for the harshest conditions and is set to once again revolutionise the industry. Available from 2500-20000 size, BG MQ is now aligned with 20 SALTIGA sizing.

Compared to conventional spools, the LC-ABS has been shown to increase the average flight distance by approx. 5% due to its reduced weight and modified shape.

Daiwa's Automatic Tournament Drag uses an improved drag grease that exhibits a low viscosity at rest, yet becomes more viscous immediately after drag start up. This reduces initial drag start-up inertia and combined with the structural changes of the ATD Drag System results in a smoother drag from the initial hook up.

Rock solid in strength and performance, alloy is tailor made for Australian conditions and allows a reel to be created that is light, yet strong, and supremely rigid and highly corrosion resistant.

A one-piece frame eliminates the use of traditional two-piece body & sideplate construction. A single piece body utilises a screw-in engine plate to house the main gear, reducing flex and twist under load creating a sealed mechanism. The elimination of the side plate also has also allowed for a more compact body design. MQ technology not only makes reels stronger & better sealed, but also more compact.