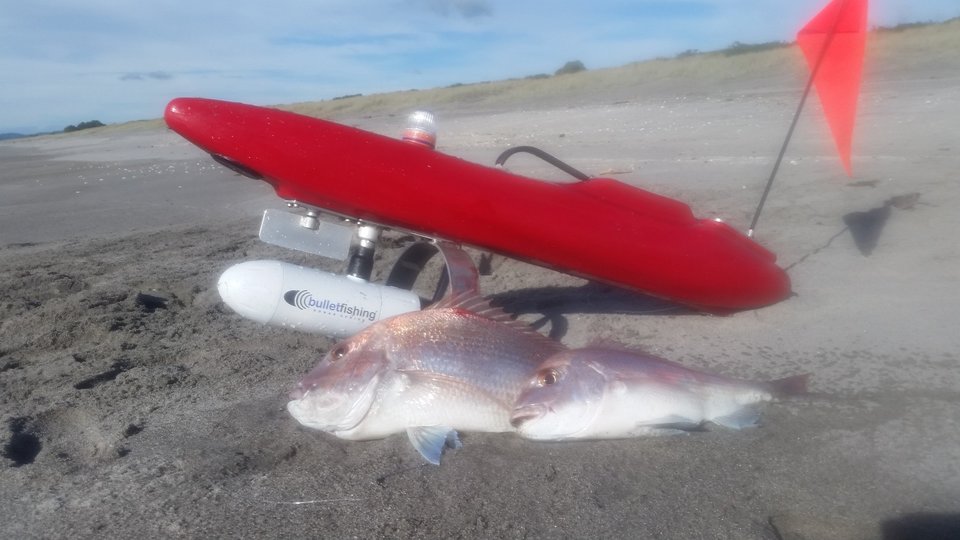 The world's only Sonar-equipped autopilot kontiki. Automatically stops your hooks where the fish are!
Price:
NZ$ 3,595.00

Bulletfishing believe in sustainability of our fish stocks and as we all know regulations are set to allow fisherman to catch a quantity of fish up to the legal limit.

One of the downfalls of kontiki fishing is the waste that can occur with fish that are hooked and left to drown on long lines that sometimes are not retrieved for over an hour or more while the fisherman is waiting for the fish to come along. The longer a fish is hooked the less chance of its survival if it is to be released. We developed and patented the bulletfishing sonar kontiki with conservation in mind. You can still only take your legal limit but with the sonar system the turn around time is so much quicker and the smaller or unwanted fish have a much better chance of survival upon release.

We have found that the kontiki can be retrieved after only 15 or 20 minutes, because if the kontiki has stopped within the preset run time it can be safely assumed it has stopped on fish, any fish caught are still very much alive, and if released they have a much greater chance of survival.

A similar catch rate to a conventional kontiki can be had using fewer hooks, this results in less bait usage. With a much shorter soak time there is less chance of attracting sharks with dead or dying fish on the line. The distance the fish are can be surprisingly short, often a school of fish is close to shore so you can get multiple sets before the batteries are exhausted.

The TimerX has several special features that make it simply old fashioned awesome. Its not only the easiest to use but its also the smartest! To set all features you just need the magnet.

Note: The auto-pilot takes only 2 seconds to set its course and this happens automatically the same time you are setting the kontiki runtime.

Setting your kontiki prior to launch

Surf-Zone. The Surf-Zone setting is the delay from the launch point to when you want the TimerX to turn the sonar on. This is useful if you are wanting to get the Kontiki out a long way, maybe past a pesky school of bait fish in close and out onto your favourite happy hunting ground!
Note: We have set the minimum surf-zone delay to 4 minutes.

The Surf-Zone delay can be easily changed by the operator by placing the magnet over the START STOP panel on the TimerX decal with the kontiki batteries disconnected and then connecting one of the batteries, once the battery is connected remove the magnet and the 4 (which is also the 10 minute) green LED will illuminate.

Now place the magnet over the panel on the TimerX decal and the LED will advance from 4 to 8 and so on all the way up to 20, these numbers correspond to the delay in minutes before the sonar is turned on.

Once the Surf-Zone delay period is reached remove the magnet and place it over the START STOP panel on the TimerX decal again and all the LEDS will illuminate for a second indicating success and your new Surf-Zone setting will be stored in the TimerX memory even when the batteries are removed but you can change it at any time.
Now reboot the system by disconnecting the battery and reconnecting and its good to go.

Note: The stored Surf-zone setting can be checked by connecting a kontiki battery and then placing a magnet over the START STOP panel on the TimerX decal, the red SONAR LED will start flashing, these flashes will correspond to the saved Surf-zone setting, I.E. 8 flashes equals 8 minutes Surf-zone delay and so on.

Operation with Sonar turned off

If for any reason you don't want to use the sonar, follow the same instructions outlined above: Setting your kontiki prior to launch: But when you get to setting the time once the 30minute LED is reached leave the magnet in place and it will cycle over to the 10 minute LED but this time the RED Sonar LED will be off. Keep holding the magnet on the SELECT SET panel and the green LED will advance from 10-15-20-25-30 minutes, take the magnet away once the desired run time LED is illuminated.

Note: The sonar will not turn on during its run if the RED sonar LED is not illuminated.

Note: The default setting for the sonar is on, if you want to operate with the sonar turned off you will need to follow the process described above of cycling past the 30 minute LED for each set.

TimerX will calculate the distance from when the fish school is detected and the kontiki will continue for another 180m before the motor stops, the baits exactly presented where the fish were detected.

Once the kontiki is retrieved all LEDs will be off except under the following circumstances: