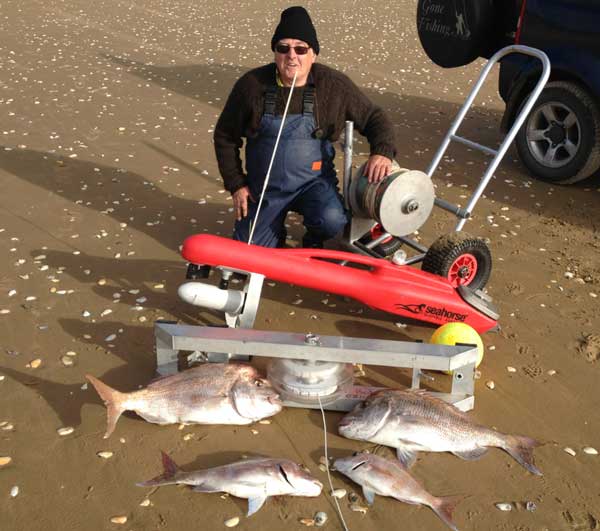 With winds blowing at 50 to 60 knots from the southwest and a 5 to 6 meter surf pounding in on 90 mile beach we decided to head to a lee shore on the East Coast. We arrived at Tokerau Beach well before dawn and headed about a kilometre south of Ramp Road.

As it was pitch black we only had the car headlights to determine the best spot to deploy the ShoreThing and Seahorse Kontiki we were using. We found a spot with masses of shellfish washed up from the easterly swell that had rolled in the day before, some of them were still alive, there was quite a live few scallops amongst them. It looked very promising!

We had brought a very large 14kg frozen octopus for bait, it was one of the biggest I have ever seen and it was in perfect condition. We skinned a leg but left the suckers on and cut 15 big baits for the 6/0 hooks we were using.

We set at 6.00am and left the gear out for two hours at 1800 meters offshore. As the sun rose we could see that the inshore waters were very dirty because of the easterly storms and heavy rain over the previous week, looking through binoculars we could see the muddy water started to clear about 1500 meters out and this greener can be seen on the video.

I was expecting smallish fish because of the conditions and was very surprised to see a 4.5kg and 4.95kg snapper come in off the first set, we also caught two smaller snapper. The tide was now half in and rising, we decided to repeat the same set but put even bigger baits on as the big fish were certainly around 1800 metres out.

It was the right choice! After leaving the gear set for two and a half hours we hauled in nine good sized snapper ranging from 2kg to 4.8kg. As we had 13 fish and the 85 litre chilly bin was full we decided to call it a day and headed to the weigh in. Our biggest was third heaviest snapper for the day.

After this great start we struggled to get onto fish for the last two days and only caught another two fish. Looking at the results at the all the weighing in sessions it was clear that there were intermittent small schools of good sized snapper from East Beach all the way down to the bottom of Tokerau Beach.

It was the luck of the draw whether a school would pass while your gear was out. In my estimation around one set in 20 delivered multiples of really good fish. Most sets caught some smaller fish and the odd bigger one. Those doing four to six 30 to 45 minute sets didn’t seem to catch much more than those doing two or three two and a half hour sets

Good quality frozen skinned octopus fishes very well on two to three hour sets, every hook either still had a fish or a good quality bait on it when we hauled in. Octopus also tends to catch larger snapper with fewer by-catch species, gurnard are seldom caught in numbers on it.

If you are fishing after a storm use a ShoreThing, some of those fishing conventional kontiki rigs had problems with drifting weed. The ShoreThing fishing teams had none.

The other pic above is from Mike Olsen who fished his Shorething after the storm at Papamoa Beach.

Find out more about the ShoreThing or purchase online